The collaboration between two outstanding artist form a peerless combination of guitar and vibraphone. The result is stunning in terms of sound and arrangement experimented with rhythmic ideas, texture and space impressed by artists enthusiasm, passion, intensity and warmth. An inspiring, enjoyable, powerhouse original compositions and standards impressed by both artists enthusiasm, passion, intensity and warmth.

Vid Jamnik was born in Slovenj Gradec (Slovenia) on the 17th of August 1993. He made his first official musical steps in music school in Ravne na Koroskem with his professor Davorin Jevsnikar in 2001. There he learned percussion with a great pleasure. In August 2005 he visited summer jazz school in Groznjan (Croatia), where he met his dear friend and mentor Bosko Petrovic. Since then vibraphone is his favourite instrument and jazz his favourite music. He mostly plays jazz but he likes classical music, too. In June 2007 he won 1st place on Euritmia international young musicians’ competition in Udine (Italy). He has already played with many big bands, groups and other renowned musicians including Jimmy Cobb, Bosko Petrovic Trio, Georgie Fame, Stefan Milenkovich, Simone Zanchini, David Gazarov, Gianni Basso, Howard Curtis, Dusko Goykovich, Rob Bargad, Arthur Lipner, … He also took private lessons and an online course with Gary Burton and participated on many workshops led by famous musicians such as David Friedman, Dave Samuels, Lewis Nash, Nebojsa Jovan Zivkovic …

In 2007 he finished his primary music school education in Slovenia and in 2012 he graduated from the Jazz department of Musical Conservatory in Klagenfurt (Austria).

In 2011/2012 he made a five-month Erasmus student exchange on the Jazz Institut Berlin with professor David Friedman.

At the moment Vid is a student of Berklee College of Music in Boston (USA). 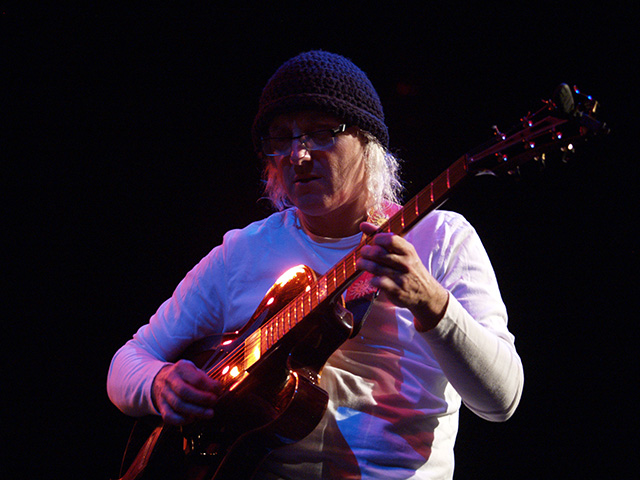 Ratko Zjaca is considered a very gifted stylist, assumes many roles in his macrocosm of music: contemporary guitarist, composer, performer and educator. His unique musical vision absorbs and reflects all kinds of music while retaining an enviable individualism and high quality craftsmanship that can span from quiet intimacy to searing intensity. Diverse musical backgrounds, which include jazz, world music, and free improvisation. He has been working on original compositions as well as crafting beautiful and haunting improvisations. He invented a unique style that is fearless, ambitious and volatile. He studied and graduated from Zagreb University. In his drive for the necessary knowledge and the enormous need for studies he sought his refuge in The Netherlands at the Rotterdam Conservatory. There he could get teachings by well-known masters. He also followed masterclasses and personal courses with Joe Pass, Jim Hall, Pat Metheny, Mike Stern, Bob Brookmayer, John Abercrombie, Mick Goodrick, Hariprasad Chaurasia and others.

Ratko started a new quartet with the legendary bass player and composer Miroslav Vitous. He released a quartet recording, Crossing The Border, in New York City with John Patitucci, Al Foster and Stan Mitrovic, with all original compisitions of all members of the quartet. He released a record, Continental Talk, with John Patitucci, Steve Gadd, Randy Brecker and Stan Mitrovic. Ratko’s latest release is a record with Simone Zanchini, Adam Nussbaum and Martin Gjakonovski called The Way We Talk.

A new CD of the ZZ Quartet, “Beyond The Lines”, on In+Out Records was released in May 2013.

The CD “Don’t Try This Anywhere” has won the Orpheus Award for 2016 – the best Italian production 2015 for jazz music.

A new CD “Life on Earth” is coming out in January 2018 – Ratko with Antonio Sanchez, Stefano Bedetti and Renato Chicco.

A new CD “Light in the World” – Ratko, with John Riley, Stefano Bedetti and Renato Chicco is out now.