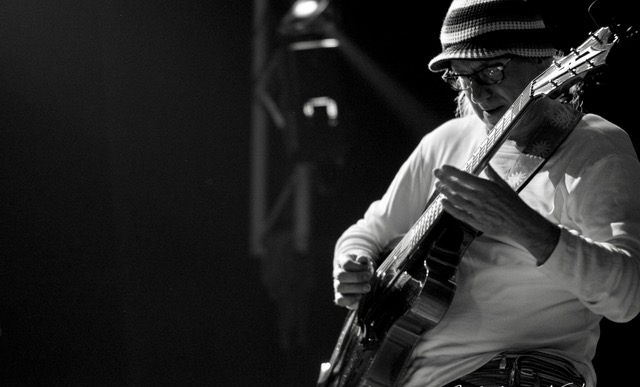 Ratko Zjaca is considered a very gifted stylist, assumes many roles in his macrocosm of music: contemporary guitarist, composer, performer and educator. His unique musical vision absorbs and reflects all manner of music while retaining an enviable individualism and high quality craftsmanship that can span from quiet intimacy to searing intensity. Diverse musical backgrounds, which include jazz, world music, and free improvisation. He has been working on original compositions  as well as crafting beautiful and haunting improvisations. He invented a unique style that is fearless, ambitious and volatile. He studied and graduated from Zagreb University. In his drive for the necessary knowledge and the enormous need for studies he sought his refuge in The Netherlands at the Rotterdam Conservatory. There he could get teachings by well-known masters. He also followed masterclasses and personal courses with Joe Pass, Jim Hall, Pat Metheny, Mike Stern, Bob Brookmayer, John Abercrombie, Mick Goodrick, Hariprasad Chaurasia and others.

Ratko is currently composing music and working on a new world music project on which he plays baritone, sitar, fretless, soprano, electric and acoustic guitars – this will be the second part of his previous record Shades of Spirit, Fretless Guitar Project.

Ratko released a quartet recording, Crossing The Border, in New York City with John Patitucci, Al Foster and Stan Mitrovic, with all original compisitions of all members of the quartet.

He just released a new CD “The Way We Talk” with Simone Zanchini, Adam Nussbaum and Martin Gjakonovski.

A new CD of the ZZ Quartet, “Beyond The Lines”, on In+Out Records is out now.

The CD “Don’t Try This Anywhere” has won the Orpheus Award for 2016 – the best Italian production 2015 for jazz music.

A new CD “Life on Earth” is out now – Ratko with Antonio Sanchez, Stefano Bedetti and Renato Chicco.

A new CD “Light in the World” – Ratko, with John Riley, Stefano Bedetti and Renato Chicco is coming out soon.